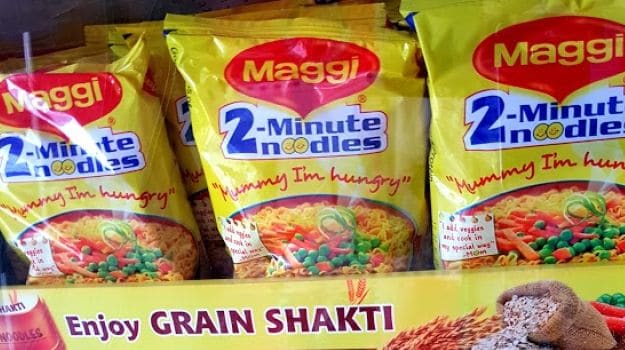 Nestle India’s revenue from operations in the March quarter stood at Rs 3,611 croreManufacturer of popular noodle brand Maggi – Nestle India reported a net profit of Rs 602 crore on Tuesday, April 20, registering a growth of 14.6 per cent in the January-March quarter from Rs 525 crore during the same period last year. According to a regulatory filing by the firm to the BSE, Nestle India reported double-digit domestic growth in the quarter ending March 2021 at 10.2 per cent, while the overall sales grew by 8.9 per cent to Rs 3,600 crore. The FMCG major reported broad-based growth in the quarter, largely driven by volume and mix. (Also Read: Nestle India Shares Fall After December Quarter Earnings)The company’s export sales were lower by 12.9 per cent due to lesser exports to affiliates. Nestle India’s revenue from operations in the January-March quarter stood at Rs 3,611 crore, up 8.6 per cent, compared to Rs 3,325 crore in the year-ago period.Nestle India stated that its demand in the Out of Home channel improved in the March quarter but continues to be impacted by the COVID-19 pandemic. The e-commerce channel delivered robust performance and grew by 66 per cent, contributing almost 3.8 per cent to domestic sales.According to Nestle India’s statement, the company’s board of directors declared an interim dividend for 2021 of Rs 25 per equity share, at a face value Rs 10 per equity share, amounting to Rs 2,410.4 million. This will be paid on and from May 19, 2021, along with the final dividend for the year 2020, as approved by the shareholders.“As the pandemic rages on, the quarter gone by has been another test of resilience of my team and our partners. I feel incredibly privileged to lead a team who faced with serious challenges, persevered regardless, to deliver double digit growth over a strong comparable in 2020,” said Mr. Suresh Narayanan, Chairman and Managing Director, Nestlé India.According to Mr Narayanan, the conglomerate’s key brands such as Kitkat, Maggi Noodles, Maggi Sauces, Nescafe Classic, Maggi Masala-Ae-Magic Milkmaid, delivered strong performances during the quarter.On Tuesday, shares of Nestle India settled 0.02 per cent lower at Rs 17,086.25 on the BSE.

Wipro Gains Around 3% Ahead Of Fourth Quarter Earnings Announcement Today